Key topics of this week: Third anniversary of the social outbreak 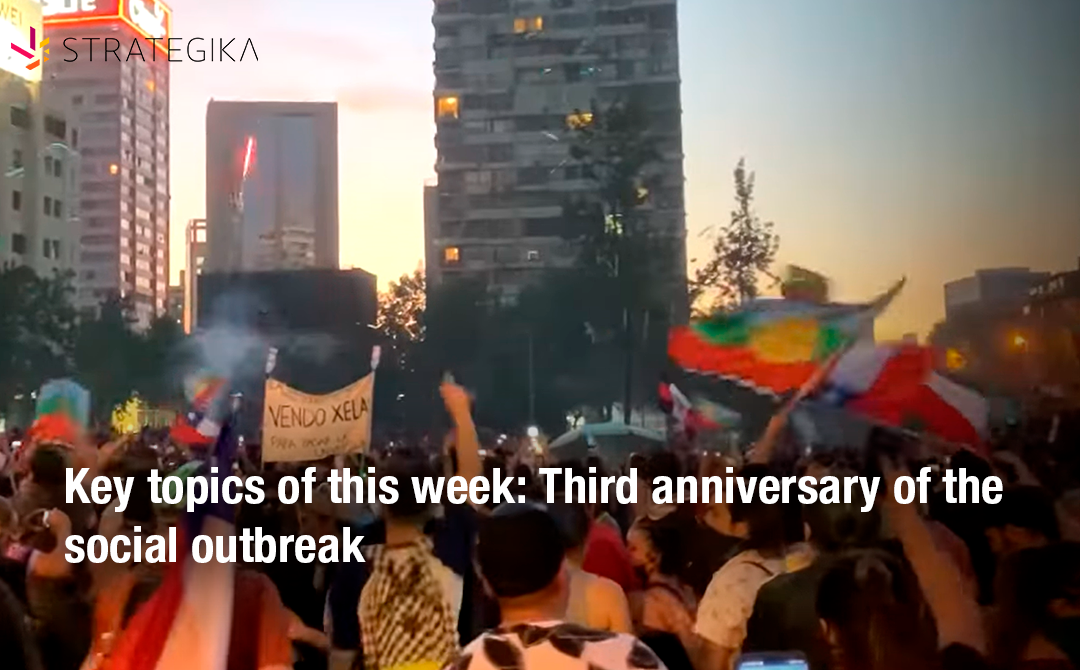 The week ends marked by the balances of the disturbances carried out after the commemoration, on Tuesday, October 18, of the third anniversary of the beginning of the social outbreak (95 arrests, 15 lootings, 150 events of alteration of public order and 24 police officers injured), in a context in which President Gabriel Boric vindicated the demands of 18-O and the ruling party ruled out apologies to Carabineros for tweets of past ministers that criticized the institution, which generated strong controversy in recent days.

This week, President Gabriel Boric was the main speaker at the XVIII National Agro Meeting (Enagro), organized annually by the National Society of Agriculture (SNA), where the president of the union asked him for «a constitution elaborated with feet on the ground».

President Boric also spoke of his eventual visit to the Araucanía Region, commenting that in the coming weeks he will visit the area, and mentioned that it is part of his deployment around the country, where he has yet to visit the regions of Aysén and Tarapacá.

In politics as well, the Ministry of the Interior and Public Security informed this Thursday that the Government accepted the resignation of the presidential delegate of the Atacama Region, Gerardo Tapia. Thus, the current provincial delegate of Chañaral, Jorge Fernández, will take over as subrogate.

On Thursday, the Secretary of the Interior, Carolina Tohá, met with the United States Ambassador to Chile, Bernadette Meehan, where they discussed various integration issues between the two countries, such as the continuity of the Visa Waiver, which allows entry to the North American nation without the need to obtain a visa.

During this day, Raúl Soto (PPD) is expected to present his resignation to the presidency of the House, as established in the administrative pact (ruling party plus the Christian Democracy and the People’s Party) of March 10, so that next week will be crucial for the parties to start defining the position.

The Senate Constitution Committee, chaired by DC’s Matías Walker, unanimously approved this week a constitutional reform to establish compulsory voting for all elections, except primaries.

Also related to Senator Matias Walker, this week he notified his party, the Christian Democracy, that he will resign from it together with the also DC Senator (for the Maule Region), Ximena Rincón, which would be effective before the national meeting of the party, next November 12.

The Salitre 2022 exercise continued this week in the Antofagasta Region.

A police milestone that will continue to be investigated and commented on during the next few days is the explosive device that was found this Thursday in a building in Santiago, in Las Condes district, where the offices of the Angelini Group operate.

While waiting for the official meeting for a constitutional agreement to be held on Monday and in the midst of the knots on the mechanism that these days prevent the ruling party and the opposition from advancing in the agreement, during the week the idea of an entrance Plebiscite resurfaced. Although in general this alternative does not convince the political parties of the ruling and opposition parties, it is revived from time to time by some actor.

Monday’s meeting, initially scheduled for Thursday, was postponed in order to coordinate the agendas of various actors and to ensure that the dialogues between the parties prosper.

The week started with the data released by the World Bank (WB) for Chile, amid high inflation and the end of liquidity (after the end of resources from AFP’s withdrawals and State aid), the organization forecasts that poverty in Chile will reach 10.5% in 2022 (surpassing the 10.2% recorded in 2015).

In economy as well, next Monday will begin the vote in particular of the articles of the tax reform in the Finance Committee of the House, a project to which the Government has put extreme urgency to accelerate its processing, that is to say, it has fifteen days to be dispatched by the respective Corporation.

Meanwhile, this week the government and business associations began an agenda to increase productivity in Chile, after the first meeting with the Confederation of Production and Commerce (CPC), and in the next few days meetings will be held with associations of smaller companies and with the Central Unitary Workers’ Union (CUT).

The National Confederation of Freight Transport of Chile (CNTC) described as «another black Thursday for transport» the new increase in the value of diesel that was applied yesterday, where the fuel increased by $10.8 pesos per liter.

Another milestone in economic matters that marked the week was the presentation by the Undersecretary of Finance, Claudia Sanhueza, at the seventh version of the business meeting of the O’Higgins Region, Eneo 2022, where she presented the main measures promoted by the government to advance in decentralization.

Also in mining, Argentina, Bolivia and Chile are preparing a document to promote an «OPEC of the lithium triangle», in order to reach a «price agreement» in view of the volatility of the mineral’s value and to coordinate production flows, of which all three have large reserves and production potential, as reported this week.

Undersecretary Sanhueza also stated that the Government has made an important effort in the design of the 2023 Budget to support the regions, not only in terms of resources, but also in flexibility for spending. «The draft Budget Law 2023, considers $1,500,620 million for the investment budgets of regional governments», she said.

Yesterday, the Undersecretary of Social Security, Christian Larraín, met with experts to discuss the proposal to be made regarding the pension reform, which is expected to be presented the first week of November.

This Thursday, the Santiago Chamber of Commerce (CCS) held the VII Version of the eCommerce Innovation Summit.

Due to the debt accumulated by the isapres with various health care providers, this week several clinics throughout the country decided to suspend their agreements. This means that, since the contract between an isapre and the health care facility is no longer in force, each patient has to make the payment in full directly to the health center and then manage the reimbursement with their respective isapre.

Regarding the dollar exchange rate, this Thursday it closed with a slight decrease, cutting the streak of four consecutive sessions of increases that it had shown and that encouraged concern in the markets due to the renewed threat of reaching $1,000 pesos.

The Luksic group’s firm will not be able to compete in the port business for three years.